Kristen Gardner’s dreams of being an organic chemist have come true. She just finished her first semester as a Ph.D. student in Berkeley’s chemistry department studying with Professor Richmond Sarpong. Not bad for someone who was told she wasn’t smart enough to do chemistry when she applied to college and also for someone who didn’t even know what a Ph.D. was. 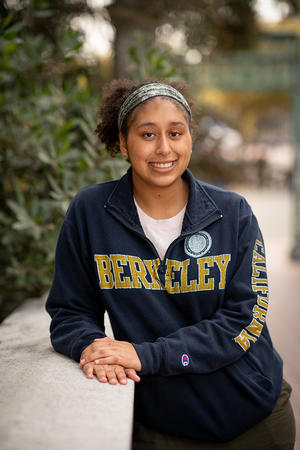 Kristen is the first to admit that she had more than just a little help getting here. “After I was accepted to UNC (University of North Carolina – Chapel Hill), I got an email saying I had been selected to be part of the Excel @ Carolina program.” The program provides the top 10 percent of admitted students with scholarships and special opportunities. Once her mother saw the Chancellor’s Science Scholars (CSS) program, the decision was made. “Well, that one says science and scholarship money,” her mom said. “So, you’re picking that one.” And even though Kristen says she didn’t really have a choice, she also says joining the CSS program is the best decision she ever made.

The program is modeled after the Meyerhoff Scholars Program at the University of Maryland Baltimore County that aims to increase the diversity of leaders in STEM fields in academics and industry. CSS selects students who are interested in doing research and going on to Ph.D. programs. Kristen was one of 35 students who made up the third cohort. “Even after the interview, I was like, I don’t know what research is but that’s fine.”

Spring Semester 2020, UC Berkeley will launch the SEED Scholars Program with its first cohort of 25 freshmen. SEED stands for STEM Excellence through Equity and Diversity. Modeling the success of the Meyerhoff Program, SEED Scholars is designed to increase the recruitment and retention of undergraduate STEM majors and prepare and encourage them to apply to Ph.D. programs.

Kristen, a North Carolina native, declared a pre-med and chemistry major. She knew what a doctor did and a friend told her that way she’d always have a job. The summer after freshman year, Kristen had her first research experience in a lab at Vanderbilt University. “I was enamored by the dynamic research environment and the notion that I was discovering something completely new.”

During that time, it became increasingly clear that it was time to let go of the MD and embrace the Ph.D. It wasn’t just because she loved research. It was also that she finally understood what it meant to be a scientist and researcher.  “Before that, I didn’t know there were things you could do with a chemistry degree besides going to medical school,” Kristen explained. When she got back to UNC, she joined Dr. Alexander Miller’s inorganic chemistry lab.

Her internship the following summer at the Broad Institute at MIT and Harvard solidified her desire to become an organic chemist that had started in high school. “I worked in a lab where their entire work is focused on making small molecules that could potentially be drugs. I got to make these small molecules that would have a broader impact if they worked. That's how I knew what I wanted to do.”

Nonetheless, Kristen stayed in Dr. Miller’s lab throughout her senior year. “I didn't see the point of switching from my lab because he was such a good mentor. It didn't make sense to me. I was getting the same skills that I would need in my Ph.D.”

Even with all the support, she got as a Chancellor Science Scholar including mentoring, tutoring for her STEM classes, networking opportunities, going to research conferences, internships, and lab experience, there’s something else that has been even more valuable to Kristen. “CSS provided me with an incredible community of amazing, diverse scholars who are hard-working and dedicated to changing science and becoming future leaders in STEM.  Even now, I reach out to alumni of the program to get advice.”

Kristen says it was the CSS staff and her fellow scholars who encouraged her to go for the opportunities that came along despite the doubts she had about her abilities. “My one piece of advice, no matter where you end up, is to apply to anything and everything, even when you don’t think you have a chance – because you probably do, and you never know what could happen.”